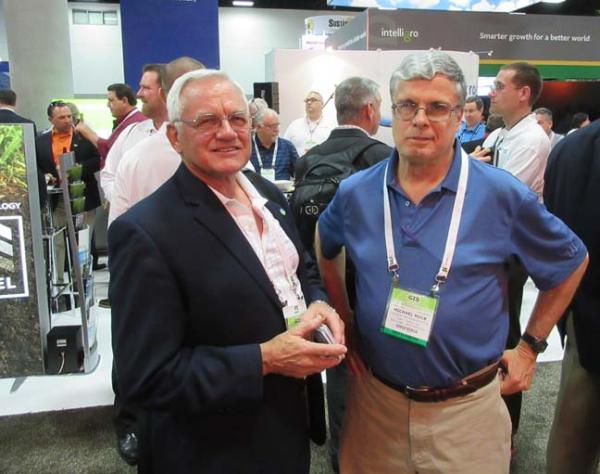 In times of crisis, it can be comforting to have a voice of reason. Someone who delivers the truth. Someone who tells you what you need to hear, not always what you want to hear. For many in the golf business who are struggling to cope with issues associated with water shortages in California, Mike Huck has been such a voice.

A former superintendent and USGA Green Section agronomist, Huck has been an independent irrigation consultant and de facto water guru for the past 15 years. He consults on everything from the design and installation of the most water-efficient irrigation systems, through his company Irrigation & Turfgrass Services, to helping superintendents understand myriad water-conservation regulations and restrictions passed down at the state and local levels, including what they mean and how to comply with them.

Whether it’s the California State Water Project that funnels water from rivers and snowpack in the North to millions of consumers in the South, Colorado River water diversion that siphons drinking water to SoCal or issues affecting recycled water in the Coachella Valley, Huck is the trusted go-to source of information for many.

His passion is what one might expect from a hydrologist or someone from the U.S. Geological Survey, not a former golf course superintendent.

Huck has indeed become for many, a voice of reason in, no pun intended, a sea of uncertainty.

“Mike is the most trusted voice of water issues in the state,” said Russ Myers, who recently returned to Southern Hills in Tulsa, Oklahoma after spending six years at The Los Angeles Country Club. “Mike is a former golf course superintendent, but he’s not a golf guy. He’s a water guy.

“With Mike, you felt you had a real voice, not a blind advocate or a paid lobbyist. He knows what the issues are, what is realistic and what is not.”

It was more than a year ago – April 1, 2015 to be exact – when, after four years of drought, California Gov. Jerry Brown ordered the California Water Resources Control Board to implement cutbacks that would reduce water use statewide by 25 percent by June 2016. Implementing those restrictions became a complicated process that included giving the state’s 400 urban water suppliers carte blanche to decide who among their customers they would target and how much each would be required to save. Cutbacks statewide ranged from nothing to more than 50 percent.
Mike is the most trusted voice of water issues in the state. Mike is a former golf course superintendent, but he’s not a golf guy. He’s a water guy.”

Before final details surrounding the cutbacks were announced, Huck had predicted cutbacks would reach 40 percent or more for some golf courses. He was right.

“The state is trying to deal with the fear factor surrounding water, and so they throw in broad-stroke regulations to try to solve it all,” Myers said.

“Mike already knows it all. From Los Angeles to San Francisco, he knows the issues, understands them and share it with everyone so that these regulations make sense to them.”

A native of Wisconsin, Huck, 59, has been in the golf business since the early 1970s when he worked at Maplecrest Country Club in Kenosha. He’s been a Californian since his days studying turf at Cal Poly Pomona, where he graduated in 1982. While at Cal Poly, he worked at Industry Hills Golf Club at Pacific Palms Resort, first on the crew, then as assistant and later superintendent until 1989. He then moved on to become superintendent at Mission Viejo Country Club and later the Southern California Golf Association Members Club.
Huck admits he struggled to deal with the private club-member mentality at Mission Viejo.

“I was getting burned out, and there was a guy coming on the board who didn’t like me, and he was coming to get me, so I left,” Huck said. “I thought it was better to leave on my own terms, but that hurt because I had put my heart into that property.

“Golf is a fun game, but it’s a funny business.”

He thought he’d find relief at the daily fee SCGA property, but he was wrong.

“I thought that opportunity would renew the fire in my belly, but it didn’t,” he said.

“I thought I was going to a daily fee operation, but it was more like the country club I’d just left, with all the grandiose ideas, but no money in place to do anything. They expected to reach the stars, but could only get to the moon.”

It was in 1985 that he applied for a vacancy in the USGA Green Section as a regional agronomist. That turned out to be a short-lived career thanks to a benign tumor that four years later resulted in a 90 percent loss of hearing in his right ear and contributed to problems with his equilibrium that made frequent travel for Green Section work nearly impossible.

“When I turned my head, it was like things were still moving, almost like vertigo,” he said. “I went back out on the road, and a year-and-a-half later it still was not getting better. I couldn’t walk a straight line. It became a quality-of-life issue. I couldn’t keep up that travel schedule like that.”

Although the tumor was benign, that did little at the time to alleviate Huck’s fears as he faced surgery to remove the growth.

“Trust me, that even with these assurances there were plenty of sleepless nights doing research online to understand what I was facing,” he said. “In reality, doing research online is probably the worst thing I could’ve done. You only read the horror stories online. You don’t read about the successes when it comes to the outcomes of these surgeries. I read plenty about people who could never get back to work and had trouble walking, etc., because of the effect on their balance and stamina from botched surgeries.”

As it turned out, the USGA’s loss was California golf industry’s gain.
I thought I was going to a daily fee operation, but it was more like the country club I’d just left, with all the grandiose ideas, but no money in place to do anything. They expected to reach the stars, but could only get to the moon.”

After a brief attempt at a career in irrigation sales, Huck’s life changed forever when Mark Mahady, a turf researcher and consultant near Monterey, enlisted his help on a water-allocation project in Las Vegas. Because other players in the project were juggling other projects, Huck ended up doing a large chunk of the work to keep the Vegas job on schedule. He enjoyed the work so much, he became a certified irrigation auditor and a new career was born. He has since stayed busy writing irrigation audits, consulting on recycled water programs and helping superintendents statewide squeeze every drop from their irrigation sources.

“Mike, by virtue of his background, became an expert in irrigation and water quality,” said USGA Green Section West Region director Pat Gross, who, like Huck, lives in California’s Orange County. “What sets Mike apart is his unselfishness in sharing this information. He reads all the articles, attends all the meetings because he sees how important this is to the industry.”

He was among the group that founded the California Alliance for Golf, a nonprofit advocacy organization that represents the interests of the state’s golf industry. He also helped found its predecessor organization.

Long before drought was a four-letter word in California, Huck was promoting water conservation and pushing the importance of regular irrigation audits. Ted Horton, CGCS, who spent more than 40 years as a superintendent at places like Pebble Beach Golf Links, said he believes it was Huck’s time with the Green Section that helped form his views on smart use of irrigation water.

“Mike was an early proponent of irrigation audits and never failed to urge those he came in contact with to improve system maintenance, scheduling, moisture sensing and the like,” Horton said.

“I would be willing to speculate that his visits to multiple properties convinced him that (most superintendents) would benefit from better irrigation equipment and better irrigation practices. This knowledge happens to be a strong suit for Mike, and he saw an opportunity to share earn from consulting in that part of the management of golf courses.”

Like the water on which he is fixated, work as an independent consultant has its ebbs and flows.

“It comes in waves,” he said. “I’m either in over my head, or twiddling my thumbs.”

Whether it is when his work flow is at high tide or low, Huck’s endeavors have taken on added significance since the drought, now in its fifth year, began.

Although irrigation work is how Huck earns a living, he shares a lot of his knowledge of California’s big picture water challenges as a sort of value-added commodity because he knows it is important for people to be informed.

He posts reams of information on water issues in California to social media outlets such as Facebook and Twitter. He also provides input to state agencies in Sacramento and to local water districts about the lengths to which superintendents are reaching to use water wisely. Likewise, he provides information to those in the golf business about state and local regulations and rationing policies, how to conform to them and how to make every drop count on the golf course.

“Mike contributed significantly to the effort of informing the regulatory water agencies, counties, cities and state about turfgrass irrigation and helped the industry to obtain reasonable drought-emergency practices,” Horton said.

“To keep abreast of the rapidly expanding knowledge, Mike pursued the information relentlessly. But most importantly, he shared most of what he learned with a large number of fellow turf management people and continues to filter reams of information, ultimately passing on the same to us.”

It’s just what one would expect from a water guy.

Read the full article and learn about Turfnet here!