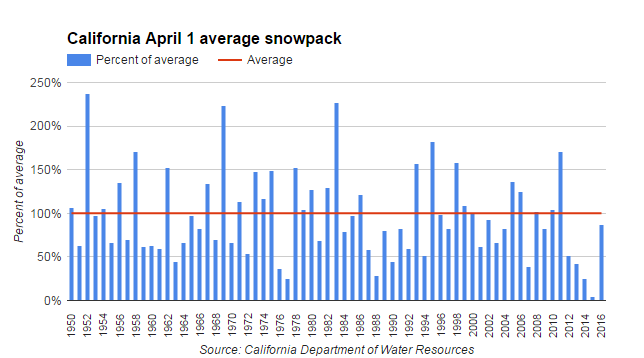 “We are likely to ease the rules or lift the rules,” said Felicia Marcus, chairwoman of the State Water Resources Control Board. “We are in better shape.”

The board imposed California’s first statewide water rules last May at the insistence of Gov. Jerry Brown — forcing hundreds of cities to limit lawn watering, ratchet up conservation programs and, in some cases, fine residents for using excessive amounts of water. Brown’s goal was to cut urban water use 25 percent on average from 2013 levels. From June through January, urban residents delivered, cutting 24.8 percent.

But with significant rain and snow in recent months, the drought emergency has softened considerably as it enters its fifth year, particularly in Northern California. The state water board is scheduled to hold a public hearing April 20 in Sacramento and will likely make a final decision May 3 on how much water rationing, if any, Californians should expect this summer, Marcus said.

“We’re not interested in keeping these emergency regulations going any longer than we have to, but we want to be judicious,” she said.

The board also is likely to make permanent the water wasting rules it imposed statewide last year. Those include prohibitions on hosing off pavement, a requirement that all restaurants ask customers if they want water before serving it, and a ban on watering lawns within 48 hours of rainfall.

The change between this winter and last winter has been dramatic.

On Wednesday, state surveyors will trudge into a snow-packed Sierra Nevada meadow at Phillips Station near Lake Tahoe with TV crews and reporters in tow. Last year, it was a barren meadow.

The most important snowpack reading of the year, the measurement, taken on or around April 1, provides a summary at the end of every winter of how much snow is in the Sierra, which makes up a third of California’s water supply.

The event is largely a symbolic photo opp. Through more than 200 electronic sensors, state officials already know that the Sierra Nevada snowpack was at 87 percent of its historic average on Tuesday, up from a shocking 5 percent last April 1.

“It’s been a great year. We could not have roadmapped a better ski season,” said Kevin Cooper, a spokesman for the Heavenly and Kirkwood ski resorts near Lake Tahoe.

Last winter, Kirkwood received 124 inches of snow. This year, that has already more than tripled to 440 inches so far. Heavenly has enjoyed 340 inches this year, four times the 84 inches last winter.

“We’ve seen a lot of skiers and riders return,” he said. “Businesses have doing really well.”

Other barometers of hydrologic health also are looking good. Among them:

In early December, Shasta, near Redding, was 29 percent full. Its water level has risen 135 feet since then. Similarly, Oroville, in Butte County, was 27 percent full, and it has risen 217 feet. Together in the last four months, they have added 4.8 million-acre-feet of water — enough for the needs of 24 million people for a year.

“Everybody down here is disappointed,” said Bill Patzert, a research scientist and oceanographer at NASA’s Jet Propulsion Laboratory in Pasadena. “The storms were headed for L.A. and made a sharp left for Northern California.”

Scientists still don’t know why, he said. And while the soaking storms all but wiped out droughts in Washington and Oregon, rainfall in Los Angeles is at 50 percent of historic average, Riverside 44 percent and San Diego 76 percent.

Water agencies around the state are waiting for the state water board to give them direction. Together, they have lost hundreds of millions of dollars in revenue from selling less water, and they are pushing hard for relief.

“We’ve got to adjust to the changing conditions. Local leaders should have more flexibility,” said Jennifer Persike, deputy director for the Association of California Water Agencies. “We asked the public to go all hands on deck and cut back, and they did it. Now conditions have changed. It’s very important to retain credibility. The boy crying wolf comes to mind.”

Environmental groups, however, are urging caution, noting that groundwater in many areas remains overdrawn.

“We’re not opposed to reductions in mandatory targets. But we want them to be conservative,” said Tracy Quinn, a senior policy analyst with the Natural Resources Defense Council. “We don’t know what next year will bring.”