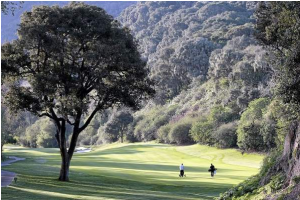 Carmel Valley >> Members of Quail Lodge & Golf Club on Monday celebrated the partial reopening of their golf course the way golfers celebrate anything: with a few true shots, a few errant ones, and a little drink.

After completing the first half of a course renovation that will upgrade playability while saving water, Quail Lodge, which opened in 1964, is nearing the end of a complete overhaul of its 850 acres that began in 2009, when owner The Hongkong and Shanghai Hotels initiated a $28 million resort renovation.

“Fifty years ago, when we opened the course in the beginning, there was one difference. We opened it when the sun was up, and not the moon,” cracked club president Lawson Little III. “But the little lazy dairy farm is a world-known resort now, and we’re moving from the first fifty years to the next fifty years.”

The dawn celebration included coffee, pastries and mimosas, as club members got their first crack at the renovated back nine holes. That part of the course had been off-limits since November, when construction began to replace the aged irrigation system, repair leaky ornamental lakes and shift bunkers around, which are now filled with sugary-white sand.

“The layout’s the same, but the bunkering’s quite different. The strategic shot value of a lot of the holes has changed,” Kerr said.

Quail Lodge sits behind only California American Water when it comes to water rights in the delicate Carmel River basin, with the course straddling the river. The overhaul included removing about 12 acres of land from irrigation, in addition to water saved by fixing the lakes and replacing the irrigation system.

“We’re hoping to save significant amounts of water,” Kerr said.

The front nine will now go under the knife, and is due to reopen in May. Kerr said members are looking forward to it.

“I’m glad to get the back side open, because they’re tired of doing the front,” Kerr said.

The project was designed by Origins Golf Design and managed by KemperSports, and includes added tee boxes. Until the front nine reopens, guests can play the newly opened back nine for $75, including cart.

“The completion of the golf course in May is the final phase of renovations for Quail Lodge,” general manager Sarah Kruse said. “The refresh ensures Quail Lodge will continue to be an iconic destination for generations of golfers for the next 50 years.”